Google shared a lot of announcements at the I/O Developer Conference last month, and some new features have been launched. In its latest feature drop, in addition to some other updates, the company also introduced locked folders in photos and night vision videos to Pixel phones.

In addition to being passcode-protected, Locked Folder acts as a local space on your device for pictures you don't want automatically uploaded to your Photos account where it might get viewed by, say, a partner who has your sign in info. You can choose to save images you shoot with the camera directly to the locked folder, or move shots you've already taken there. You'll find the Locked Folder under the Utilities section of the app. The videos and stills won't show up on shared devices, Memories or other apps in your device, and will require your phone's passcode or your fingerprint for access.

Google also updated its Night Sight camera mode that uses long exposure to capture detailed shots in low light, and it now supports videos... Sort of. The updated Night Sight will now take both a picture and video when you tap the shutter button, and the system stitches together the multiple frames you record for however long you leave the camera running to make an animation.

In a GIF showing off the feature, a four minute timer showed up after astrophotography mode was enabled and the user hit the shutter button. Google said this feature is live now on Pixels 4 and newer so you can try it out (try updating your apps if you don't see it yet). 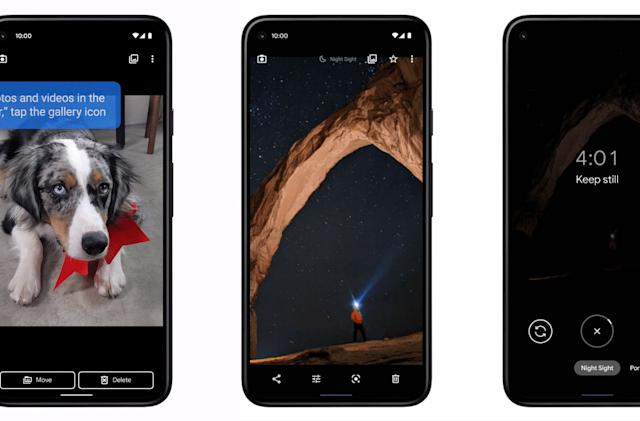 Some other tools rolling out in this drop include a Heads Up feature in Digital Wellbeing that will remind you to look up from your screen when your phone detects you're walking. You'll also be able to answer or reject calls on your phone by saying "Hey Google, answer [or reject] call]."

The clipboard in GBoard is also getting more context-aware, so when you copy a chunk of text that contains phone numbers, email addresses or URLs, it'll also strip those out and offer them as suggestions for pasting. When you do send them in, say a message to a friend, clicking on them will quickly launch the relevant app, like Maps for navigating to the address or Gmail for the email.

Finally, this feature drop expands some existing features to more parts of the world. Car crash detection is coming to Spain, Ireland and Singapore in addition to the US, UK and Australia where it's already available. Call Screen is now supported in Japan, while transcription app Recorder now recognizes more of what Google calls "English dialects including Singaporean, Australian, Irish and British English." It's hard for me to think of British English as a dialect, and as a speaker of Singlish I'm guessing that's what "Singaporean" is referring to. But if Recorder does start recognizing "las" "lors" and "lehs" and transcribes them accurately, it could make the app much more coherent for Singapore users.

The company also added new pride-themed wallpapers, ringtones and notifications combined with this month’s LGBTQ commemorative event. All the features mentioned today should be available now or soon, if you don’t see them, you may want to try to update your app.

Next: Square may make a "hardware wallet" for Bitcoin