My very first experience ever of a 'pancake' lens was with a 45mm f2.8 Pentax lens back in the 70s or 80s. It was a first and a curiosity and not all that popular at that time. With time moving on, I have owned a Micro four Thirds system for some time and have a couple of pancake lenses for that. Small, light and compact, they can make the camera and lens a pocketable combination. I had recently added the NX20 and, although the pancake lenses probably better suit the 'compact style' cameras within the NX range rather more than they do the 'SLR-type' ones such as the NX20, the extra 1 1/2 stops of this lens over the kit zoom can help make the difference in poor lighting.I was able to very briefly test all three of Samsung's pancake lenses as a prelude to deciding which I would eventually purchase. I had considered the 30mm as a probability but I might want to add either the 16mm or 20mm, possibly at a later date. The test amounted to a few minutes with each in turn but only in the immediate vicinity of the shop concerned. I was able to gain a relative impression of each lens but the shots were rather boring and simply of buildings and not worth publishing here or elsewhere. I have since acquired the 30mm and have also ordered the 20mm, too.A pretty good performer all-round, with only five elements it is similar in optical design to the classic 60-70s standard lenses from the likes of Praktica (East German) and Zenith (Russian), which the younger photographers will probably never had known or used. The cameras were inexpensive but very capable for their price and often about one third or less the cost of the nearest Japanese alternatives. They mostly used 4 or 5 element lens designs (6 in the later Helios f/2) and, like this, were good performers but not quite matching the more advanced Japanese 6- or 7-element designs for ultimate performance.According to some independent reviews read, this lens is capable of outperforming the equivalent models from Panasonic and Olympus, all of which are quite good although the Panasonics have a slight edge on Olympus for optical performance. It is also said to beat hands-down a modern-designed 50mm standard lens of a certain brand (neither Nikon or Canon). That being said, this lens will very nearly match the better standard primes used with some APS-C and full-frame cameras. That is outstanding for so simple a design. Some independent reviews have rated this lens as 'outstanding' for its optical performance and consider it in amongst the top flight for its resolution at the centre. Edge performance is a little lower but improves when stopped down by a couple of stops and very nearly matches the centre. That is very good!The lens follows other Samsung lenses in appearance. The body is a strong black plastic material with the usual metal lens mount. The focus ring is rather thin and very far forward; there simply isn't the space available for anything else. The familiar blue band surrounds the body. Whilst there may be an argument for a metal body in certain larger and heavier designs, in a lens this compact it really isn't needed and there would be little to be gained. Wi 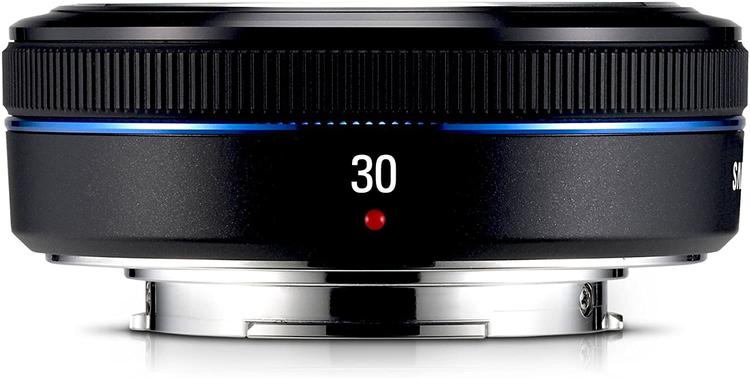 th careful handling and storage when not in use, the lens should be good for several years.The design used here is for absolute compactness, minimal weight and bulk and a few design compromises were necessary. Barrel distortion is slightly greater than is normal, even for a zoom, but should not be unduly noticeable in real terms. In most cameras, correction is made in-camera, but in the worst case scenario can be corrected in software, e.g. Lightroom. Colour fringing due to chromatic aberration is also slightly more pronounced than normal but can be corrected in similar fashion. More importantly for some, the lens does not have an internal optical focussing system but physically extends when focussing at closer distances. Speed of focus is no worse than with the kit lens and may be very slightly faster as the degree of travel required is much less and there is a lower mass to move. Focus accuracy appears to be very good thanks to Samsung's excellent system in the NX20.Because of its minimal size, there is no room within the lens body either for the iFn system or for optical stabilisation. The former is a minor issue but greater care will be needed in order to avoid camera shake or any other cause of camera movement. A more stable stance, better camera hold with perhaps a hand supporting the body and lens from below, or a tripod may help. A higher ISO setting and a faster shutter speed may also solve the problem. It may be worthy to note that Olympus offers a comparable 25mm (50mm equivalent) pancake lens for its micro-four-thirds system although Panasonic do not. Olympus have their IOS within the camera body but Panasonic uses a similar system to Samsung. Their 25mm offering is the Leica-designed but Panasonic branded 'full-size' lens which also omits IOS although it is arguably large enough to accommodate it. Interestingly, the iFn system is included in the very slightly larger 20mm lens which is of similar appearance although the IOS system is again missing. However, it is common for wide-angle lenses not to have internal IOS although there are a few exceptions.The lens is probably best suited for street photography but it can be used for anything. It may be a little too short for portraits (46mm equivalent with 35mm which traditional advice suggested is too short for head-and-shoulder shots as it can lead to exaggerated features) although Samsung in some literature suggest that this and the 20mm are both perfectly capable of shooting portraits, but should be fine for duos through to large groups. The f2.0 aperture is quite fast for a modestly priced lens nowadays and will add possibilities which the slower kit lens may render less easy. It does not come supplied with a lens hood although one is available as an optional extra. The hood is rather shallow, screws in rather than using a bayonet system which the longer lenses tend to use, and may help a little towards reducing flare. Because of the lens' compact dimensions, it accepts the rather small 43mm size filters (common to all current Samsung pancake lenses) which you may not possess.A very nice lens that would be a brilliant addition to any NX body.

Latest: Mine Detection Robot and Related Technologies for Humanitarian Demining