Samsung Galaxy S5 Active is equipped with a 16MP camera. Samsung is silent on the exact specifications, but judging from the photos taken, we will say that it is the same large ISOCELL sensor as the sensor inside the Galaxy S5.

It's a 16:9 sensor so widescreen photos use the full sensor. We are again guessing there's a Phase Detection auto focus sensor inside the Galaxy S5 Active.

The interface is the same as in the S5. There's a column of shortcuts on the left, the middle two of which are customizable. All settings are collected into a grid of shortcuts so you can access everything easier.

The new camera interface • all settings

The Mode button has been simplified too, it's now just a scrollable list at the bottom. Several options have been combined into Shot & more - Best photo, Best face, Drama shot, Eraser and Panning shot.

The Virtual tour shot mode is similar to panoramas except you can move forward, turn left or right, move some more. The result is an animation of your camera movement, the phone will even draw a map with your path. More modes can be downloaded too.

Selective focus is another cool mode. It takes two shots and processes them so you can photograph a close-up subject and blur the background or blur the object and keep the background in focus.

A quick note on Virtual tour and Selective focus shots - they produce a single JPG file that's easy to share. When viewed, it appears as a single photo, but you'll need a compatible Galaxy device to view the additional functions (refocus or play the virtual tour). As a result file sizes are pretty big too.

We wish Samsung enabled an option to export virtual tours to videos so they'll be much easier to share.

The Samsung Galaxy S5 Active camera is an excellent all-rounder. Photos taken in daylight have a commendable level of detail and, while processing comes on a bit strong, it shouldn't be visible unless you're viewing photos at 100%. 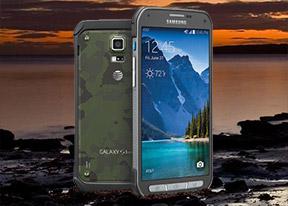 The Samsung Galaxy S5 Active camera produces great photos for the 16MP league - follow the links to our tool to compare the device to the other smartphones we've tested.

Videos are stored in MP4 files with bitrate varying by mode. 1080p @ 30fps videos are still captured 17Mpbs, 60fps mode goes up to 28Mbps, while 2160p videos are at a whopping 48Mbps. That means a short 30 second video grows to 180MB - be mindful of that if you're recording a video you want to share later.

In any case, sound is recorded in stereo at a bitrate of 128Kbps and a sampling rate of 48kHz.

The video camera doesn't have as many fancy shooting modes as the still camera, but dual shot is available and you can do time lapse videos. The time lapse videos can speed things up to 8x, with resolution and frame rate remaining at 1080p @ 30fps.

You can use touch focus before and during video recording, and you can switch back to continuous auto focus if you want. There is also a digital zoom of up to 4x, and the quality is quite good even at the highest level.

Videos shot with the Samsung Galaxy S5 Active offer stunning detail, especially if you shoot them at 2160p. Noise levels are low, color accuracy is good and there are few traces of aggressive post processing (unlike with the still camera).

The same goes for the 1080p video mode too - obviously you don't get as much detail, but the much smaller file size and better compatibility (many computers can't play 2160p properly, especially when it's in a Flash container) make us think this mode will be used the most.

Also here is an untouched

The Samsung Galaxy S5 Active is 2160p-enabled cameraphone. The resolution chart (third one) shows an image quality that will give 8MP still cameras a run for their money. Image quality in good light is great, though compression artifacts start to creep in the shadows. In low light, most of the fine detail is gone, we'd go with 1080p in the dark.