‘s release. When we first saw the

NX11 at this year’s Consumer Electronics Show in Las Vegas

we felt it was a minor increment over the original model – so does the Samsung NX11 have enough new points to make it worth shouting about?

It’s difficult not to compare the Samsung NX11 to the previous NX10 simply because the two are so similar. This is very much subtle upgrade rather than overhaul territory, though the features are strong: a 14.6MP APS-C sized CMOS sensor capable of shooting from ISO 100-3200, a 3in AMOLED screen and 920k-dot Electronic Viewfinder (EVF) are among the most prominent points.

It’s the new i-Function (i-Fn) lens compatibility that is the bigger leap forward. This Samsung-only feature is a function button on the lens itself that can be used to control the most immediate settings, even using the lens’s focus ring to quick-select options if desired. The Samsung NX11 comes equipped with an 18-55mm i-Fn straight from the box and therefore aligns itself with what Samsung is pushing as the NX-series’ unique feature. It would seem that the fundamental point of releasing the NX11 is simply to get the i-Fn lens out to as many prospective users as possible.

There are some new shooting modes too, including Panorama mode for live panoramic capture, a sound and picture mode, plus Lens Priority that recognises the attached i-Fn lens and optimises settings accordingly.

Although not a DSLR by design, the NX11 could have you fooled as it does look like a mini-DSLR in many respects. The layout and locations of the mode dial and button controls are well placed and you won’t be left hunting for settings. This is further helped along by the inclusion of the i-Fn button that, once you start getting in to using it, is really rather useful to quick-adjust exposure compensation, ISO, white balance and (depending on setting) aperture and shutter speed. The fact the settings show both on screen or through the viewfinder in real time will speed up the way you work. Our only slight qualm is that the i-Fn button on the 18-55mm OIS lens is placed rather far back and doesn’t feel natural to press, plus its inclusion omits the stabilisation button that was on the standard 18-55mm lens.

The NX11’s grip is raised fairly prominently from the body which makes it comfortable in use and easy to carry around in one hand.

Elsewhere and interior menus are impressive to look at and use, though do feel rather different to other cameras and so can take a little bit of getting used to – but we like the visuals.

First and foremost is autofocus system that’s improved above and beyond other Samsung NX models. Rather than fully under- and over-focusing in order to attain final focus, Samsung’s latest algorithm can recognise the steepest rise in contrast and hone in on that area of the contrast curve instead of the full contrast range. The result? A genuine improvement that makes autofocus quicker than the NX10 was capable of. However, the main issue with the AF system is in lower light whereby, even with the presence of reasonable contrast, it can take more than one attempt for focus to be realised.

Using the NX11 has a number of other plus points too. That AMOLED screen is far superior to an LCD thanks to its fluidity and high contrast. Above this is the 920k-dot EVF that, while of a reasonable VGA resolution, may still be a dividing issue among prospective purchasers. On the plus side the EVF offers a full 100% field of view that many optical viewfi

nder equivalents fall short of, plus the electronic build means full visual displays. The downside is the apparent lag that’s prominent in low light and the viewfinder doesn’t feel quite as bright as an optical equivalent. 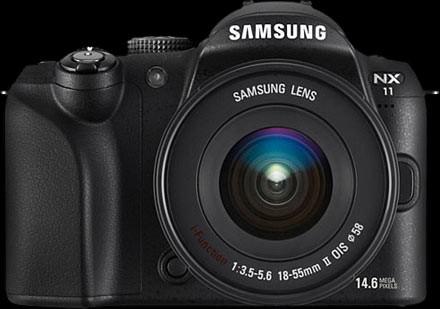 An area of improvement that Samsung has kept on the quiet is the movie mode. Thanks to the addition of continuous autofocus (CAF) that can be toggled on or off using the Depth of Field Preview button, there’s a lot more control than the NX10 offered. The CAF is very smooth to transition between one subject and another without over or under-focusing. It’s a shame there’s no full manual controls, but aperture priority does allow for live aperture adjustment, albeit at the expense of ISO sensitivity.

The addition of the new Panorama mode puts the Samsung up there alongside similar competitor models, but it’s the Lens Priority option that’s rather baffling and, we suspect, won’t be a commonly used setting. With the 18-55mm attached anything the camera was pointed at was met with an automated landscape mode on return.

Other subtle improvements have taken place such as both Mac and PC compatibility with the included Raw conversion software. The previous NX10 model was PC-only, which left many Mac users feeling cold to the original Samsung.

The NX11 avoids the super-high ISO settings offered by some competitor cameras, instead opting for a sensible ISO 100-3200 range. Although there is some image noise present throughout this range, image quality is otherwise decent and sharp from ISO 100-400. It may not win the prize for retaining sharpness above this setting, but the larger sensor size certainly puts itself above and beyond the capabilities of some similar Panasonic models, such as the Lumix G2. ISO 800 through to ISO 3200 soften and increase in image noise presence exponentially, with ‘blotchy’ colour noise and significant softness from noise reduction rendering ISO 3200 just off the mark.

At around £480 the Samsung NX11 is competitively priced. The Sony NEX-5 costs about the same (but doesn’t have a viewfinder), the Panasonic Lumix G2 is actually a little less at between £420-460 and adds the benefit of a vari-angle touchscreen, while the £500 Olympus E-PL2 is the priciest of similar-spec Compact System Cameras.

The only slight concern is the availability of product. With few online retailers and not many large chain stores stocking the Samsung NX-series it’s a wonder as to how much reach the product will garner over coming months.

There’s little new to get excited about when comparing the NX11 to the previous NX10, but that’s beside the point when considering the NX11 on its own merit. An upgrade model this isn’t, but the NX11 does successfully bring

out-of-the-box i-Fn lens compatibility. That helps in providing a ‘calling card’ for the NX series; that unique principle that should help the NX stand out in an ever more crowded Compact System Camera market.

Image quality is good, the autofocus has been improved by a fair margin from its previous incarnation and the body layout makes good sense in the hand. It feels like a mini-DSLR in many resepcts, though with hot competition working up yet more advanced models we’d still like to see a bigger lift for the NX-series.

Despite all its great points, the NX11 just isn’t quite that big push we’d been hoping for. Saying that it’s still a very good camera indeed that’s worthy of attention and one of a handful of Compact System Camera to provide a viable alternative to a full-on DSLR system.

Latest: eadphones to an Xbox One