I wanted to write a review, not just about these headphones, but comparing them to the G4ME ZERO. I originally purchased the G4ME ONE, and upon waking up the next day, realized I bought the wrong ones. I wanted the closed version. So I ordered the ZEROs right away, and within a couple days I had $400 worth of headphones sitting on my desk.First off, both sound absolutely fantastic paired with an adequate amplifier. I gave the ZEROs a good test run with a couple long gaming sessions and listening to some tunes. I was impressed by the quality of the sound, they sounded great. Gaming is where I ran into trouble. I typically use closed headphones, but I've always used cheaper ones, which don't isolate the sound as well as higher quality headphones. Games sounded great, but talking to teammates was very troublesome. They are so well isolated, I can't hear myself talking. At all. Plug your ears with your fingers and try holding a conversation with someone, exactly like that. Even enabling the stereo mix setting that allows you to quietly hear yourself through the mic, it wasn't enough. I just could not stand it. Enter the G4ME ONE.I finally unboxed my G4ME ONEs today and plugged them in. The sound quality is close on both, but these seem to be a bit cleaner, especially on the lows. On the ZEROs, bass felt ever so slightly "detached" from the mids, if that makes any sense. On the ONEs, the frequencies seem to blend better. They're outstanding. Mids and highs are crystal clear, bass is clean and punchy but not boomy at the extreme low end. They sound very natural all around.One small con about both headsets, is that the volume wheel on the right ear cup doesn't go to 0 volume. It only goes down to about 25% volume, which is a little irritating if you want to quickly silence your headset.A few other differences between the two is that the ONEs are an all-plastic design, whereas the ZEROs have a metal rod connecting the ear cups to the headband. How much that actually adds to the structural integrity, I don't know. The ZEROs also come in a carrying case (that nobody in their right mind would use) and so the ear cups rotate 90 degrees to fit into the case. The ONEs only rotate a few degrees, which is fine for me. The ZEROs win hands down in comfort; it's like soft, leather-wrapped pillows aro

und your ears, and they're large, but my ears got very hot very fast (and I was wearing them in a ~55-60 degree house). The ONEs have slightly smaller felt cups and are a little denser but no temperature issues. Other than that, they're very similar.In summary, the ZEROs would be ideal if you're just listening to music (but then why are you buying a headset?), and the heat isn't an issue for you. For all around use, the ONEs are the clear winner here, at least in my opinion. The sound is incredible and slightly better than the ZERO, they're plenty comfortable, and if you need to talk or hear a fire alarm going off, you can. They don't suffer from the heat issues and feel reasonably durable.Overall, very, very happy.ZERO Pros: - The most comfortable headphones I've ever put on my head. - Excellent sound isolation.ZERO Cons: - Excellent sound isolation. So good that it becomes a problem to talk. - They get VERY hot, very fast.. no breathability.ONE Pros: - Ever-so-slightly richer and more fluid sound. - I can hear myself talk. - Ears stay nice and coolONE Cons: - Because of the open design, you can hear the outside world pretty clearly.. but this is to be expected. - Slightly firmer, slightly smaller ear cups. Fabric (microfiber?) instead of the amazing leather-wrapped heavenly marshmallows in the ZEROs. Still very comfy though.Both Pros: - Unbelievable sound quality. - High quality braided cord, doesn't tangle. - Mic conveniently turns off/on when you flip it up/down.Both Cons: - Volume wheel only goes from ~25%-100%, not down to 0%.I have mine paired with a Sound Blaster Z sound card. Do not, I repeat, *DO NOT* try to run these without an aftermarket sound card, they WILL sound terrible. The onboard audio controller on motherboards does not supply enough power to drive them adequately, and is often accompanied by a fair amount of electrical interference. And don't cheap out and buy a $20 sound card either, those typically don't offer any more amplification than onboard audio.UPDATE (9/2017): After about 2.5 years (warranty is 2 years), the fabric on one of the ear cups split at the seam. See attached photo. Bummer. Sennheiser does sell replacements (Model HPZ 26) but I don't have a clue how you're supposed to put them on. Unlike other headphones, these seem to be permanently fixed. 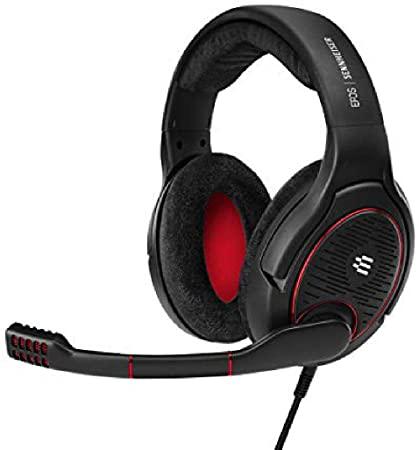