A small and convenient package

The Samsung NX3000 is a low-cost APS-C compact system camera – for around £330 you get the body and a decent 16-50mm power zoom kit lens. This is the successor to the

, and adds even more of a retro flavour to keep it in-line looks-wise with the recent Samsung NX Mini.

The 20.3-megapixel Samsung NX3000 is a compact system camera for the mobile generation, and should slot into most people’s lives like a dream. However, it’s not perfect – and not actually an NX2000 upgrade in every respect. 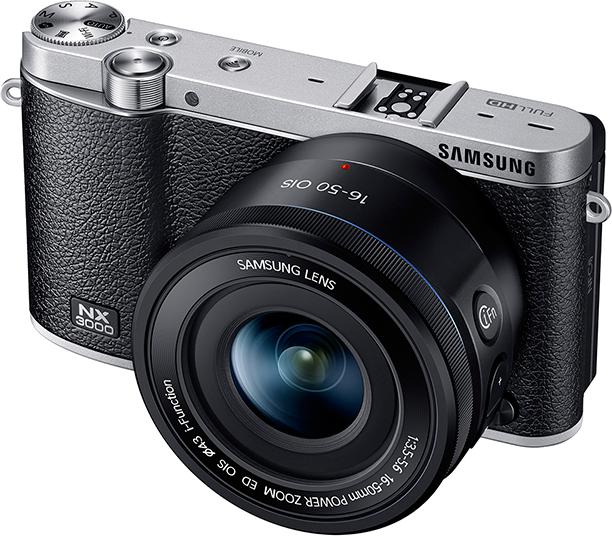 One of the Samsung NX3000’s key draws for the photography novice is its design. While not made of the aluminium and leather used in the old-school cameras that have inspired the look – it’s made of various kinds of textured plastic – it’s more keenly stylised than rivals like the

This kind of retro styling is nothing new to Samsung’s CSCs, but the NX3000 takes it a step forward from the NX2000. The metal effect top plate and leather-style body finish that wraps around to the back of the camera give the camera a look similar to the higher-end

, where the NX2000 deliberately had a less showy, more ordinary design.

References to the old days of photography are just that though – references. In just about all other respects, the Samsung NX3000 is a thoroughly modern camera. It uses microSD memory cards rather than the full-size ones we’re used to, and is charged over microUSB rather than needing a separate charger.

With accessories interchangeable with those of an Android smartphone, the Samsung NX3000 is immensely convenient for those who have already bought into other areas of tech. MicroUSB charging also means you can carry around an external battery pack rather than a second battery – extremely useful for holidays, when you might want to charge up multiple gadgets. The battery is rated for 370 shots, slightly lower than the Sony Alpha A5000, but around the same level as the Olympus PL-5.

prefer the style of the slightly chunkier Samsung NX300, though – the model up. The Samsung NX3000 only has a very slight ‘bump’ to provide extra hand grip on its front. It is just 39mm thick. There’s no inbuilt flash either, although you do get a flash module that slots into the hotshoe on the top place. There’s not a great deal of meat on these bones, which is good news for portability.

As is common to APS-C DSLRs, the lenses will often provide a lot of the bulk of your setup, but Samsung has minimised this by bundling the slimline power zoom 16-50mm kit lens with the standard NX3000 package. Other NX lenses will work with it, though.

As well as being very small for a zoom lens, the f/3.5-5.6 16-50mm glass offers optical image stabilisation and a near-silent powered zoom. This duo is a dream for those who want to shoot video – non-stabilised lenses and sticky zooms are a nightmare for the videographer.

You can’t shoot 4K video as capture maxes-out at 1080p 25p, but there’s more to video quality than simple resolution, and the Samsung NX3000 provides a versatile all-round package. Like just about every new camera in this class, NFC and Wi-Fi are aboard too, and let you hook up the NX3000 to a phone very easily using the Samsung Smart app. There’s even a dedicated Wi-Fi button on the top plate.

Back to the lens – thanks to the amount of slimming-down done in the camera body, the lens helps out by taking on some buttons you might otherwise access on the body itself. There are zoom controls, and an iFunction button. This switches between settings for ISO, white balance and exposure, giving you easier control without requiring you to use buttons on the NX3000 itself.

Most control is performed using just a few buttons on the camera’s backplate, though. There’s a d-pad that doubles as a scroll wheel and a quartet of buttons surrounding it. As with most entry-level compact system cameras, settings have to largely be controlled in the menu system rather than relying on dedicated physical controls

Some of you may be disappointed to hear the Samsung NX3000 does not have a touchscreen, which limits the ways you can interface with the camera to an extent. It’s especially noticeable when selecting focus and exposure points.

The elephant in the room – the Samsung NX2000 did have a touchscreen, and a much better display than you get here. The NX3000 has a 3-inch 460,800-dot screen where the old model has a much larger, higher-res 3.7-inch 1,152k-dot display. While the new camera offers decent colour fidelity and outdoors visibility, there’s no contest – the NX2000 is far superior.

However, the more button-led operation of the NX3000 can feel less fiddly than fully touch-operated cameras: the older model didn’t have the standard rear button layout seen in the NX3000.

Even looking at the camera’s rear, there’s literal room for improvement given the amount of bezel on show. If it wasn’t for cost-saving, fitting in a larger screen would have certainly been possible.

The screen is also home to one of the Samsung NX3000’s lead features, though. It’s hinged to allow the display to flip back for easy selfies. If you need any more proof that the core audience for this camera is young and mobile-obsessed, here it is. But it’ll handle family group shots as well if your arms are long enough.

Next: our AirPods to an Xbox One