For many people, electric bicycles have become a necessity in New York City. The courier used them to shuttle between the apartments, dragging bags of fragrant takeaways. Tourists took them from the CitiBike station and lapped lazily around the park. The recent increase in sales proves that residents are accepting these relaxed rides as they struggle with streets that are still not as crowded as they used to be.

Point is, we’ve seen a lot of them cruising through the boroughs in the last year. But none of them look like the Civilized Cycles Model 1.

Conceived and created by founder Zachary Schiefflin, the $5,500 Model 1 looks more like a Vespa than a traditional e-bike, which — strangely — makes perfect sense. A lifelong rider, Schieffelin, and his wife opened the first Vespa dealership in New York around 20 years ago before pivoting into selling electric Zero motorcycles and dreaming of building a vehicle of their own. The end result of that long gestation is an unusually genteel e-bike that officially goes up for pre-order today, with shipments expected to land in bike shops and doorsteps later this year.

Make no mistake, though: the Model 1 might not look like a traditional e-bike, but it sure rides like one. In fact, it rides even better than a traditional e-bike. That’s thanks in large part to the Model 1’s most novel feature, an automatic suspension that smooths out rough roads for the bike’s riders. And yes, “riders”, plural. And no, we don’t just mean the many members of a household taking their individual turns; the Model 1 was designed with tandem riding in mind, and can support up to 400 lbs worth of passengers. 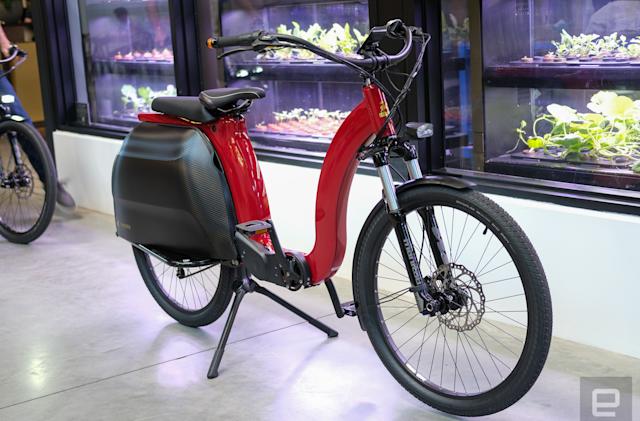 The panniers also conceal the Model 1’s most important component: a 10.5 amp-hour battery that’s rated for up to 25 miles on a single charge. This placement seems particularly inspired for a few reasons — because the battery is just strapped to the side of the wheel, it’s easy to disconnect and charge it while the bike is locked up outside. Since it hasn’t been engineered into the frame itself, the battery can also be easily removed when its cells can no longer hold a full charge, making it much easier to recycle or responsibly dispose of. For that matter, you can also extend the Model 1’s range by buying an additional battery and strapping it in yourself.

Oh, and you can use it as a power bank to recharge your phone or tablet, just because. That nod to our always-connected lives doesn’t end with the battery, either. While we couldn’t try it out for ourselves, the Model 1 can be locked with a PIN you punch in on a small LCD touchscreen, and an integrated GPS should be at least somewhat helpful if the bike ever gets boosted.

Before you assume we’re in love with this thing, it’s worth noting that the Model 1 still has its share of caveats. The company claims the seat can be adjusted for people as short as 5’3”, but my 5’8” frame and I had trouble getting comfortable because my legs are on the short side. (Pro tip: just goose the throttle a bit to build some momentum, then swing both feet onto the pedals.) The addition of turn signals for street riding was a welcome touch, but you can’t signal a turn with both hands firmly in place — you have to reach for the very tip of either handlebar. Manually changing gears is also handled through a knob on the left handlebar, which for better or worse makes the whole affair feel a little more like riding a CitiBike than a $5,000 luxury machine.

Beyond all that, the one thing that might throw off some riders is the bike’s weight: with the panniers completely empty, the Model 1 weighs around 90 lbs. While that means it feels plenty sturdy while moving in straight lines, you’d probably do well to avoid sharp turns whenever possible.

So, no, Model 1 is not a perfect electric bike. Even so, its charm lies in how it combines practicality with the most comfortable design and excellent speed. This combination explains why Civilized Cycles is trying to market Model 1 as a potential car replacement for some people-after all, when all you need is to transport yourself, your partner, and how many bags of groceries are in the city? Personally, I don't believe this argument yet, but as many cities begin to reconsider their relationship with cars, Model 1 is likely to find a foothold.

Latest: The "DJ mode" of Amazon Music reproduces the atmosphere of the old-school radio station

Next: According to reports, Facebook's first smartwatch will be equipped with a detachable camera