Since iOS 15, Siri's voice recognition function can be implemented on the device. The update will make Siri faster, and in some cases, allow it to run without WiFi or a data connection. Apple announced an upgrade and several other privacy updates that come with iOS 15.

For Siri, processing audio locally will alleviate some of the privacy concerns associated with audio recordings. The company had been previously criticized for a program that allowed third-party contractors to review Siri audio — some of which contained sensitive information — in order to review their accuracy (Apple later made recordings an opt-in feature).

But with iOS 15, many common Siri requests will be processed on-device, so no audio will ever leave your phone. According to Apple, common requests like timers, app launching and music playback will now happen on-device. This should speed up the requests, and allow them to work offline (though some requests, like dictating a message, will still require an internet connection).

Other privacy updates are meant to make it more difficult for third parties to track what's happening within apps. In the Mail app, Apple is adding a new feature to prevent tracking pixels from functioning. “Mail Privacy Protection” will hide users’ IP address and location details from email senders. This will also prevent software that tracks whether or not a message has been opened from functioning. 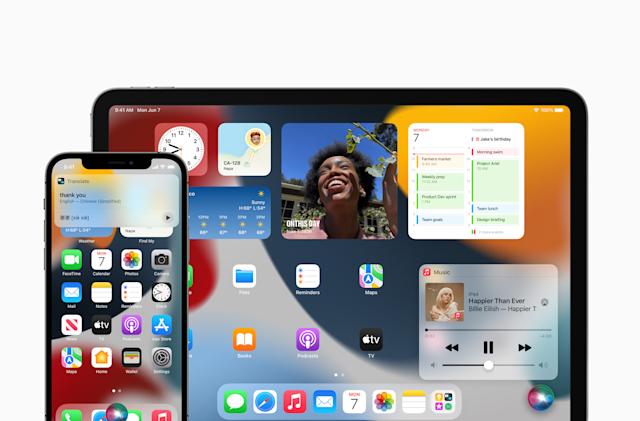 Apple also previewed a "Hide my Email" feature similar to its "sign-in with Apple" for apps. The email version will allow users to "share unique, random email addresses that forward to their personal inbox anytime they wish to keep their personal email address private." The feature will be supported in the Mail and Safari apps, as well as in iCloud settings.

The company also introduced new “app privacy reports,” which will surface more detailed information about how third-party apps are using the app permissions they've been given. The new reports will show detailed stats on how often each app is using its access to location, camera, microphone and other data over the previous week. The reports will also show what other domains are contacted during browsing, so you can get an idea of who else the app may be sharing data with.

The new privacy reports are likely to further rankle Facebook, which has clashed with Apple over previous updates that allowed users to opt out of tracking features. Ahead of the WWDC keynote, Mark Zuckerberg said that Facebook would charge less commission than Apple for creator monetization features, and that the company is working on a feature that allows users to “see how different companies' fees and taxes are impacting their earnings."

Finally, Apple provides developers with more privacy-centric tools. The new "share current location" feature allows apps to ask the user's location in a single instance, rather than always or whenever the app is in use. Similarly, with photo access, developers can choose to request only a specific album instead of all the images on the device. There is also a "safe paste" option that enables users to paste content between applications without triggering clipboard notifications.

Latest: Apple TV 4K can use HDMI eARC to play any TV audio on HomePod

Next: Google Cast updates make it easier to move audio between devices